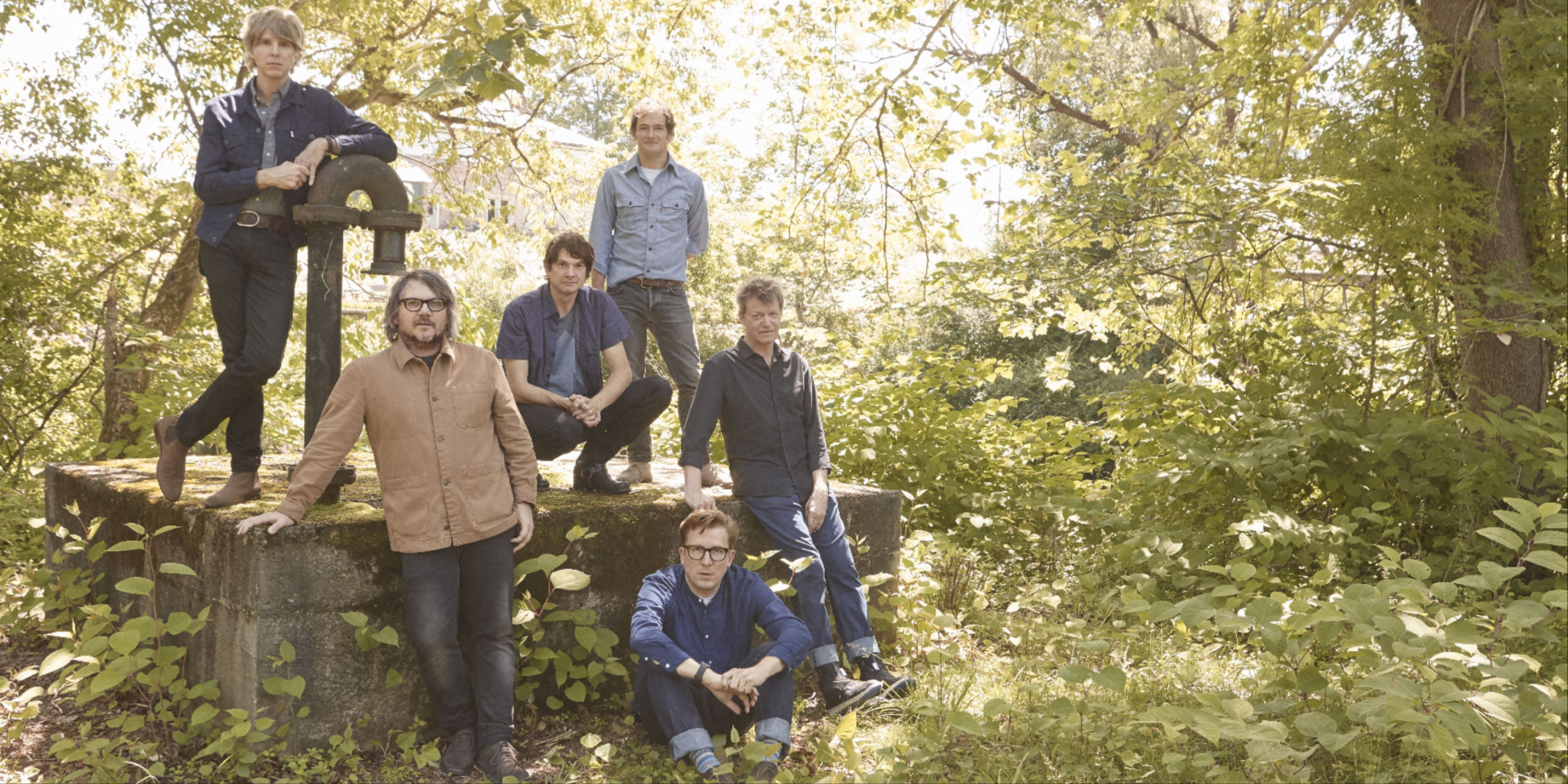 ODE TO JOY TOUR
Throughout the past two-plus decades Wilco has won multiple Grammy Awards, released ten studio albums, as well as a trio of albums with Billy Bragg penning music to lyrics by Woody Guthrie. They have founded their own record label (dBpm Records) and festival (Solid Sound), and 2020 sees them curating Sky Blue Sky, a destination concert experience in Mexico, for the first time. The Chicago sextet continues to be regarded as a live powerhouse, as described by NPR “To see Wilco on stage is to hear the best of the best.”

The band’s forthcoming album, Ode To Joy, will be out October 4, 2019. The band will be touring Europe and North America extensively surrounding its release.

RESERVED SEATS
Reserved seats closest to the stage are NOT covered by a roof, chairs are provided by the venue. PLEASE NOTE: Some seats in Sections 1 & 5 are possible Limited view due to stage equipment set on ends of the stage.

You may bring your own chair (Any height/No Foot Rest or Canopy)). Low Beach chairs may be rented for $5.00 cash at Guest services. For every chair rented we will donate 20% back to The Town of Cary’s Play it Forward - Scholarship Fund.  Proceeds go towards the fund, which provides scholarships for Parks, Recreation, & Cultural Resources' programs.

RESERVED TABLE SEATS
Reserved Table seats are covered by a roof and are located behind the lawn seats. Numbered tables are 6 seat tables (1-44), 4 seat tables are lettered (A-FF) and are higher pub tables.

Ticket Limit: 4 Per Person
* All dates, times, acts & prices are subject to change without notice.

Tickets for Booth Amphitheatre events are subject to applicable taxes and fees. A 7.25% NC Sales & Use tax will be added to the ticket price.

PREFERRED PARKING: A limited number of PREFERRED parking space are available for $10.00 per car in advance or $15.00 on the day of event (cash only).

PICK UP & DROP OFF: If using a taxi, Uber etc please follow the signs & our Parking Staff to the pick up & drop off area.

All bags, back packs, purses are subject to search.

Venue concession stands will be open serving a variety of food and beverages. Food trucks scheduled will be posted on our website 48 hours before the event. Food trucks are located on the Lake path.

Why not Picnic in the Park? Let us pack your picnic! Pre-order dinner and pick it up when you arrive! Orders must be place at least 24 hours prior to the date of the event.

Our Virtual Café offers a variety of food items from appetizers to desserts. Your order will be waiting for you when you arrive on-site at the Amphitheatre! Booth Amphitheatre Picnic in the Park catering partners include Taziki’s Mediterranean Cafe, Lowes Foods and Great Harvest Bread Co.

Picnic in the Park

Wilco, Ode to Joy
No one is more aware than Wilco that, on the heels of albums titled Schmilco and Star Wars, reappropriating the title of one of the most famous works of music in history—and in these times*, no less—could come off to some as slightly disingenuous. But while acknowledging his band’s own history of irreverence, here Jeff Tweedy snubs that angle, intending that we should take Wilco’s 11th studio album, Ode to Joy, with open hearts.

“I think it’s audacious and sincere,” Tweedy says. “It just kept coming back as the one title that felt honest. The record is, in a weird way, an ode; this terrible stuff is happening, this deepening sense of creeping authoritarianism that weighs on everybody’s psyche on a daily basis, and you’re allowed to feel a lot of things at once. And one thing that is worth feeling, that is worth fighting for, is your freedom to still have joy even though things are going to shit.”

Besides, no one is more aware than Wilco that, on the heels of ten damn Wilco albums—and especially in these times**—an 11th simply wouldn’t be warranted were it not presenting something equally new and necessary.

Following a year that produced a pair of solo albums as well as a bound autobiographical memoir, no one could ever accuse Tweedy of lacking a motor. But where those recent works reveled in their incisive, confessional focus, Wilco, as he says, has a broader mandate, one that requires the space to react to a sonic environment with a little more abstraction being baked into the equation. And so, with an eye on The Climates yet resolute in his belief that they should not dominate the headlines of our daily lives, he gathered Wilco to The Loft in Chicago for work.

“I wanted to write lyrics and create an environment for them that felt like our current landscape,” he says. “It forces us to ask, What do you do with those really insular feelings that feel almost shameful to allow yourself to indulge because of the greater amount of suffering you are witnessing? Well, so far I’ve only been able to figure out that you make art with them. But I don’t want to ignore the reality that they are somehow smaller than the landscape. And it’s a weird landscape to make art in, because at the same time I don’t want to talk about it directly, I don’t want Him or That to own my joy or my art—they don’t deserve it. They can’t have everything. So that allowed for the music to provide a lot of the commentary.”

On the subject of resistance, another looming elephant in the room provided the band a second behemoth of which to be wary: rock music itself. “I am at a moment in my life where I feel the canon of Baby Boomer Rockism tropes—Rockist music—is complicit,” Tweedy says. “All of the music I hear that draws upon those tropes feels like it’s based in fear: I’m afraid that we are not going to have any audience anymore if we don’t keep perpetuating this. That notion is completely divorced from the most important aspect of what rock and roll is to me: selfliberation, self-actualization, self-invention. I can probably intuit that because I know that I’ve felt it. Rockism is not intellectually an honest place to be, so this is more just a personal observation of what I don’t want to do.”

From its very onset, Ode to Joy reflects and rejects these notions while building up far greater ideas from their foundations. Throughout the entire album, drums pound and plod with a steady one–two pulse, meant to mimic the movement of marching—a powerful act utilized on both sides of the authoritarian wall. From the sparse and lovely opening duo of “Bright Leaves” and “Before Us” to the Nels Cline guitar freakouts of “We Were Lucky” and the gorgeously fractured final tune “An Empty Corner,” Glenn Kotche’s percussion propels the music forward while Tweedy’s measured words flesh out the cleared paths. While all six members of the band can be heard on every song—most clearly on the upbeat acoustic numbers “Everyone Hides” and “Love Is Everywhere (Beware)”—it’s clear that Tweedy and Kotche were the launching pad from which most of the songs materialized, as they sketched initial ideas for the album together as a duo. By focusing on a unique rhythm track and a minimalist instrumental accompaniment— typically acoustic guitar—and pairing that with observant lyrics at once hopeful, morbid, tolerant, and abstract, the band’s vision was achieved.

“They’re really big, big folk songs, these monolithic, brutal structures that these delicate feelings are hung on—that’s basically how I feel right now,” Tweedy says. “Everything is designed to be authoritarian. There is a sense of foreboding but there’s also a desire to have some comfort, and to me that marching sound is really pleasing, almost like a heartbeat or something elemental, like a nice Q-tip in your ear. I’m not saying I’m depicting the current American landscape, I’m just trying to have something feel the way I feel when I think about it.”

Whether our joy is measured by sparks felt when clutching old sweaters to our chests, by the number of tiny digital hearts earned from a shared photograph, by a guitar solo or a drumbeat or a piece of cotton on a stick, or by something even greater, Wilco wants to sincerely remind us to wear that feeling loud and proud. This is Ode to Joy: pick it up, hold it tight.