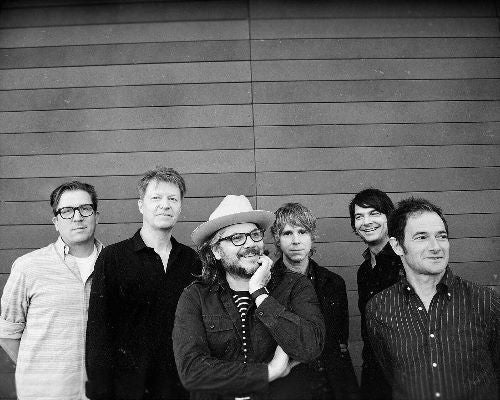 Tickets go on sale Friday, June 7 at 10am.  Tickets available at etix.com.

“You don’t gain anything, being precious about making records,” says Jeff Tweedy.  Then he laughs.  “I think this is a pretty irritated record.  I sort of gave myself permission to complain.”

Schmilco, Wilco’s tenth studio album and the fifth by the current sextet lineup, began to percolate at around the same time as its predecessor, 2015’s Star Wars.  As the songs Wilco developed during that period progressed from musical snippets to fuller structures, and then to lyrical composition, the band began blocking the music into two general album ideas—the first louder and harder, the second more modest in volume and expression.

“I liked the idea of releasing Star Wars the way we did,” says Tweedy, “with very little advance notice.  The music on that album felt irreverent in a very electric-rock way, but the other music felt irreverent in a quieter, less layered way.  Some of the songs could have been made to work on either album, really, but the alternative to making two records would have been to spend another year really honing everything, all of it, getting it all right for that kind of release.  It just gradually became clear that Star Wars was going to be the easier project to finish first.  Those songs were a lot farther along than the ones on Schmilco.”

Where Star Wars finally coalesced into a boisterous, glam-rocking showcase of Wilco’s variable styles, Schmilco is something of its quieter mirror counterpart—more intimate and candid, executed in modest arrangements and instrumentation.

“Maybe we got lucky,” says Tweedy of Schmilco’s sonic and expressive frankness, a unified quality of the record that makes Schmilco rather a distinctive entry in Wilco’s late catalog.  “I think Sky Blue Sky and Wilco (The Album) are similar to Star Wars in that they all work as collections of different kinds of songs.  But with Schmilco I was wanting to say things much more directly.  There turned out to be a lot less in the way of layering and overdubs.  That gave a lot of space over to each instrument on each song.  There isn’t much room to hide in these arrangements.”

Indeed there’s no record much like Schmilco in Wilco’s history, though it shares DNA even with the band’s earliest work.  “Normal American Kids” opens the record with Nels Cline’s hushed, wobbly electric runs beneath Tweedy’s fuller, deeper vocals and mid-range acoustic strumming.  It’s a jittery interplay that highlights the tension in the song’s focus on youthful outsiders, the impossibility of fitting cleanly into place (“Oh, all of my spirit / ached like a cut / I knew what I needed / would never be enough”).  Minus Cline’s guitar fills, musically and melodically it’s a song that would have sounded at home alongside the warm acoustics on Being There, Wilco’s 1996 sophomore release.  But the song’s attunement to tension here sets a tone that sustains throughout virtually the entirety of Schmilco.

You hear a similar skittery vibe on “If I Ever Was A Child,” the advance release from the record, in Glenn Kotche’s light skiffle percussion, in Jeff Tweedy’s high, airy vocal, and especially in the lyrics, which focus on the conditional and the comparative: “Well I jumped to jolt my clumsy blood / while my white, green eyes / cry like a window pane / can my cold heart change / even out of spite?”  You hear it in the chugging, gradual build-up of full band instrumentation of “Cry All Day”—a song that begins in soft dynamics, and slowly comes to sound as though the horses are straining at the reins.  You hear it in the fractured, slightly more oblique lyricism of “Common Sense,” “Nope,” and “Locator,” and even in the loping major-seventh goof of “Someone To Lose,” which reminds you again how adept Wilco can be at dressing sinister thoughts in pretty clothes (“Now where you gonna go like a cobra coiled? / Sweating in a sweater, you’ve got too much style / But you’re never alone, someday they’re gonna get you…”).

“At some point when you start shaping a record, you begin looking for ways to make it tell a story that makes sense to you.  Whether it makes sense to a listener is another thing.”  And yet the more you play it, the more intimate a record Schmilco sounds, in the way that albums that offer open expressions of uncertainty and frustration can, strangely enough.  The directness of the music, the openness of the lyrics, make it a record that encourages a certain kind of listener to lean in to it, to meet it rough edges straight-on.  If it’s an album that’s frequently raw in its content and rhythms… well, so can the human heart be.

“I think there’s such a thing as a ‘positive negativity,’” says Tweedy.  “I can be a pretty irritable person.  But I think there’s a value in taking the stuff that’s really frustrating you, really pissing you off, and making something beautiful, some kind of art out of that.”  In Jeff Tweedy’s story of it, Schmilco is an “irritable” record.  Whether it sounds that way to your ears is a different story—your story, each listener’s story. Still, for all its uniqueness in the context of the band's catalog, like all of Wilco's records, Schmilco is not a new direction so much as a snapshot of a time and space in which Tweedy and company were working at the moment.

“There are people who take Wilco’s records way more seriously than we do,” says Tweedy.  “I think it’s good that we don’t.  A lot of people think the whole point of being in a band is to make records, but it really isn’t.  The point is to make music.”

After all, as some irritable guy or another once said, you don’t gain anything by being precious.  Precious, schmecious.  Records, schmecords. Wilco: Schmilco.